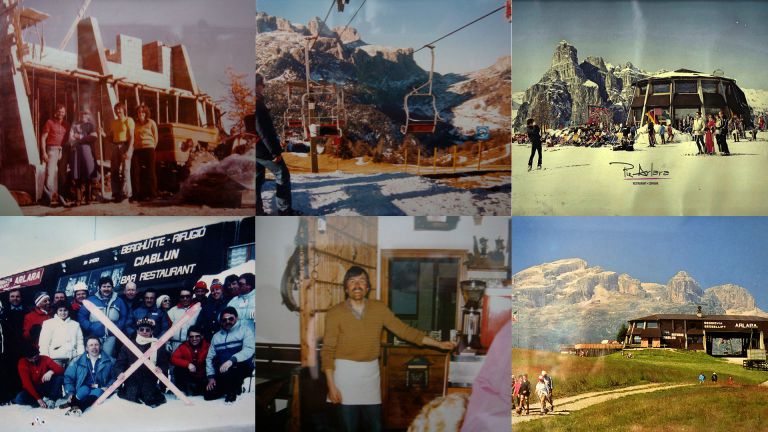 It all started in 1978, when the construction of the first chairlift Arlara inspired Hermann Vittur, together with his brothers and sister Alma, to build next to its top station a small mountain hut with a sunny terrace on a piece of land inherited from father Mariangelo. The task turned to be anything but easy in the absence of roads, telephone and any sign of civilization, except for the worksite indicating the assembly of the chairlift. But with the help of friends and parents the dream came true and changed forever Hermann's life. Shortly afterwards he married Berta and they started to run together the new mountain hut named Ciablun (according to the name of the meadow where it was built).

That was the beginning of a long way made of numerous satisfactions and conquests, but also of hard work and various difficulties. Life used to be determined by nature and snowless winters, in the absence of snowmaking facilities, used to mean hard times for the business. But the family always remained united and faced every challenge with optimism.

As years passed, technological progress gradually reduced the austerity of the mountains, making Alta Badia more and more liveable and attractive for tourists. New snowmaking systems made winter seasons more balanced and predictable. New ski lifts provided new connections and access routes. In 2002 the replacement of the old chairlift Arlara with a new 4-passenger detachable version with canopy brought to the relocation of the top station slightly away from the hut, which let the Vitturs expand the restaurant and add the new dining area, built of ancient wood originating from old South Tyrolean barns. In 2010 the construction of the Prè Ciablun chairlift connected the hut with the ski runs towards La Villa and San Cassiano. In the meantime, Hermann and Berta's children also joined the team, first Armin in 2002, then Melanie in 2007, and the small Ciablun Hut has evolved into the Alpine Restaurant Piz Arlara.

Nowadays, 40 years after the year 1978, the family spirit, that has made the whole venture possible, is stronger than ever. The new generation of the Vittur family has brought new ideas and energy, has filled the restaurant with vibrant and lively atmosphere, without ever compromising its authentic charm and extraordinary cosiness.
Loc. Pré Ciablun
39033 Corvara in Badia (BZ)
VAT No.: IT00884520214
T.+39 0471 83 66 33
M.+39 329 06 56 602
E.info@pizarlara.it
©
Piz Arlara
Credits & Privacy
produced by
NEW PARTNER: