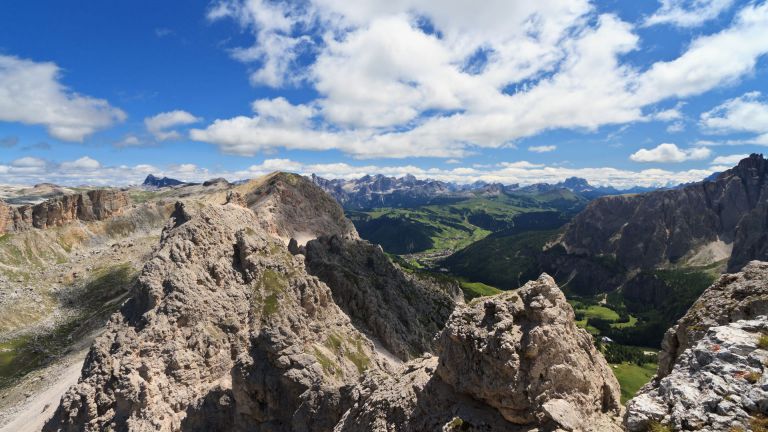 The Dolomites: unique and mighty

Unspoilt nature has an extraordinary appeal, especially in a region like Trentino – South Tyrol. The land of a thousand faces, as many as its landscapes. In this charming diversity the Dolomites have always played a particular role. Imposing, impressive, mysterious, the so-called Pale Mountains exert a magnetic attraction on anyone who dares to set foot on their territory. So much so that in 2009 they were declared one of the UNESCO World Heritage sites.

These rocky giants have always determined the life of local people, offering refuge and protection, but, in return, obliging them to work hard in order to survive in extreme mountain conditions and almost in complete isolation. That's how the dolomite walls of Val Badia, Val Gardena, Val di Fassa, Arabba and Cortina d'Ampezzo became the cradle of the Ladins who have developed here their own language and culture, both of which are still rigorously preserved. But the isolating power of the mountains has been so strong that, after all, every valley has its own identity and features its own heritage of typical flavours and traditions. Seize the opportunity to discover those of the Badia Valley at the Piz Arlara Alpine Restaurant in Corvara. Every flavour here is enhanced by the marvellous view of the Dolomites, considered by lots of people to be the world's most beautiful mountains.
Loc. Pré Ciablun
39033 Corvara in Badia (BZ)
VAT No.: IT00884520214
T.+39 0471 83 66 33
M.+39 329 06 56 602
E.info@pizarlara.it
©
Piz Arlara
Credits & Privacy
produced by
NEW PARTNER: